Following the political change of 2008, Nepal Army is the only remaining traditional friendly institution in Nepal historical linkage with India

No two countries in the world have such a close relationship between the two national armies like the Indian and Nepali Army. Having share common civilization and religious, cultural, linguistic and traditional commonalities, this kind of relations is natural.
Although over the last 700 years, the nature of states and their political boundaries have changed and now there exist states set up under the western political philosophy of sovereign nation-state, the nature of Nepal’s political relationship with India has also changed.
Nepal and India’s military relations go back to 1303. King of Gorkha Drabya Shaha, who laid the foundation of the Gorkha Army (present Nepal Army) for national unification, was a descendant of Rajput from Chitor Rajasthan fled in 1303 following the fall of their Kingdom Moslem attack.
Even after the 1814-Sugauli Treaty, former prime minister Mathbar Singh Thapa was appointed as a commander of the army of Punjab’s by King Ranjeet Singh. The long traditional relations between Nepal-India military continue even today in the form of the Gorkha battalion.
Along with Gorkha battalion, Nepal Army also sent to India to support the modern Indian army to restore peace after 1947 or the division of India.
Despite uprooting all the traditional institutions and relations following the change brought by 12 point agreement, what has not changed much is Nepal’s military to military, religious, cultural and civilization relations with India. However, in absence of monarchy, a key institution of continuity, all traditional institutions are declining.
A major breakdown in Nepal’s overall structure has made following the agreement, which was mediated by India, signed between Maoist rebel and mainstream seven parties. With the abolition of the monarchy, there occurred a major breakdown in religious, cultural and civilization relations.
Thrived and groomed in the anti-Indian slogan, Nepal is under communist ideology and traditional ideology is fading along with monarchy institution. Nepal is gradually drifting from its southern traditional orientation. 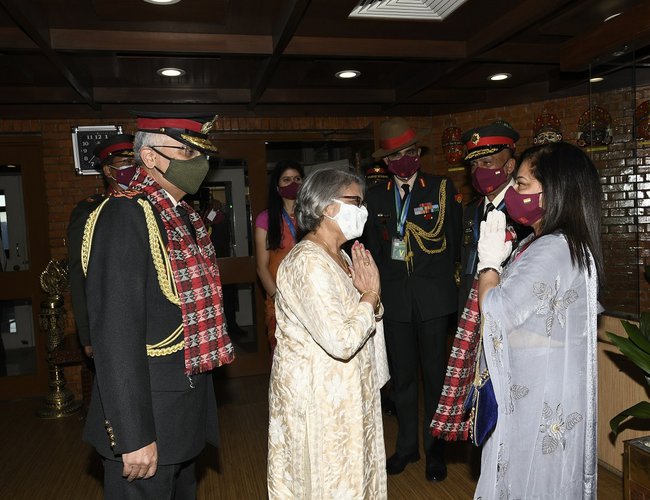 Nepal Army is the only traditional institution that exists in the country, which was created and led by King Prithivi Narayan Shah for the purpose of unification of Nepal, However, the institution has also been passing through rough weather to adjust with new radical institutions in the Republic Nepal.
Instead of patronage of traditional neutral monarchy, Nepal Army is now under the patronage of President Bidhya Bhandari, who is accused of acting under the direction of her Nepal Communist Party.
With the shifting global geostrategic situation, Nepal’s importance has also changed in the region. In this connection, the visit of Indian Army Chief General Manoj Mukunda Naravane to Nepal is highly significant and important.
General Naravane, who is visiting Nepal at the invitation of Chief of the Army Staff (CoAS) General Purnachandra Thapa, can make a major difference to strengthen traditional relations between the two countries.
Formal Programs
Chief of General Staff, Lieutenant General Prabhu Ram Sharma welcomed COAS General Manoj Mukunda Naravane at Tribhuwan International Airport today. President Bidya Devi Bhandari is scheduled to confer the honorary title of Chief General of the Nepali Army on Indian Army Chief Naravane on November 5.
Although Indian Army Chief Naravane came to Nepal as a part of the tradition of honoring the Chief of Army Staff of India in Nepal and vice-versa, his effort to renewal relations will be highly important.
Given India’s growing border dispute with China and the new strategic shift, Indian Army Chief Naravane’s meetings with his counterpart CoAS Generals Purna Chandra Thapa will have a greater meaning.
General Naravane is in Nepal to receive the honorary title but it should be understood that his visit won’t be limited to that.
Although CoAS General Naravane was dragged into a controversy as on May 15 he stated that Nepal had raised the issue of India’s encroachment of Lipulek, Kalapani, and Limpiyadhura at the behest of someone else, implicating China, he corrected his statement later.
Indian Army says Naravane’s visit aims to further strengthen strategic, defense cooperation between India and Nepal.
Understanding its traditional relations with Nepal Army, a traditional alley, he corrected his statement and said that Nepal-India relations were strong and would continue to be so in the future.
“Nepali Army believes that exchange of such high-level visits and continuation of tradition helps in strengthening relations between the two armies, contributing to enhancing the relationship between the two countries,” said Nepal Army in its statement.
As Nepal India relations have been going through a difficult phase and growing Chinese interests in Nepal, there is a wide interest in this visit. Prime Minister K.P Sharma Oli, who also holds the Defense portfolio, will hold talks with Indian Army Chief Naravane during which the border issue will most likely surface.
Dr. Rajan Bhattarai, Foreign Affairs Advisor to Prime Minister KP Sharma Oli, talking to The Rising Nepal, said, “it is gratifying for the two countries that the Indian Army Chief Naravane is visiting Nepal and it should be taken as a sign to maintain smooth political and cultural relations between the two countries.”
Security experts in Nepal hold the view that the upcoming visit of the Indian Army Chief should be perceived positively. They said that the government should have a clear view of the political and bilateral relations of the country.
The Indian Embassy’s spokesperson Naveen Kumar said that Gen. MM Naravane’s visit would deepen the long-standing and customary bonds of friendship between the two Armies.
“His visit will provide an opportunity for both sides to discuss the bilateral defense partnership and explore avenues to further strengthen it for mutual benefit.”
Although the Nepali Army has stated that the visit of Indian Army Chief Naravane is regular and traditional, it is being viewed from different angles owing to the border dispute and restoring its traditionally friendly relations with Nepal Army.
Given past experiences, military diplomacy proves more meaningful on some occasions. During 2015, the visit of COAS General Rajendra Chhetri to India helped to ease the blockade.
With all traditional institutions and elements no more, how two militarizes further strengthen relations and help to smooth political level relations in the coming days remain to be seen