Nepal’s Parliament has cleared a map that includes areas with India. What has happened to the relations built on historical ties? A look at the influence India once had in Nepal, and where it stands today

Last week, Nepal’s Parliament cleared a Constitution Amendment Bill that endorses the country’s new map that includes territories with India — Limpiadhura, Lipulek and Kalapani. Weeks earlier, Nepal Prime Minister K P Oli had said in a speech that those areas would be brought within Nepal’s map and possession.
This has been a troubled phase in Nepal-India relations, often described in textbooks as “unique”, “time-tested” and cemented by “common heritage, culture, civilisation, history and geography”.
Favouring India
Previous standoffs have been effectively resolved through direct negotiations, back-channel diplomacy and an accommodative spirit on both sides.
King Mahendra convincingly assured India way back in the 1960s that a road built to connect Nepal with Tibet had only “developmental significance and no strategic significance at all”.
In the 1980s, King Birendra annulled a contract that China had won under a global tender to build the 210-km Kohalpur Banbasa Road closer to the Indian border, after Rajiv Gandhi raised concerns over security. Birendra handed the task over to India.
According to the accounts of Bishwabandhu Thapa, Home Minister in 1962, King Mahendra “gave the Kalapani location temporarily to India” on Prime Minister Jawaharlal Nehru’s request following India’s setback in the war with China. However, this is not in line with India’s official perception. Former Foreign Secretary Shyam Saran wrote in The Indian Express (June 13, 2020), that “both Monarchs Mahendra and Birendra thrived on a diet of anti-Indian nationalism”.
According to Punya Prasad Oli, a former Director General of Nepal’s survey department, King Birendra had asked him not to make an issue of the Kalapani dispute in the 1970s. Link
All these are seen as instances of Nepali rulers maintaining a delicate balance in relations with two giant neighbours, but eventually favouring the south whenever India and China’s interests have clashed.
The turning point
A 12-point understanding among Nepal’s eight political parties including Maoists, signed in November 2005 in Delhi, scripted the ouster of the monarchy.
India was for long a factor — and to a large extent the sole external actor — in Nepal’s internal politics. But when India openly took the lead role in transforming Nepal into a secular republic from a Hindu kingdom, it set off events leading to India losing its clout and allies in Nepal.
The suspension of the monarchy and its subsequent abolition in 2008, and declaration of Nepal as a secular country, was followed by Nepal’s journey towards federalism. None of these crucial issues was discussed at length in Parliament.
The European Union took a very open stance that secularism will have no meaning without the right to conversion being incorporated as a fundamental right in the new Constitution. This led to resentment among the majority population about this “imposed secularism”. Other radical agenda got overshadowed as the civil-society-new-power axis and international stakeholders simply dismissed these as regressive forces.
The EU and the US, which had begun to emerge as India’s allies in Nepal’s transition after 2005-06, began supporting radical federalism based on ethnicity, higher autonomy and with the right to self-determination that initially Maoists had backed.
China, worried about the combined presence of India, US and EU in Nepal and their influence on internal politics, began increasing its presence and investment in Nepal, targeting tourism, post-earthquake reconstruction, trade and energy, with a message that its interest in Nepal is no less than India’s or its allies put together.
Although political parties backed by India in the 2005-06 movement continue to be in power in Nepal, they have visibly become more and more distant from New Delhi. The Maoists, who are now part of the ruling NCP headed jointly by Oli and Prachanda, are no longer under Indian influence. 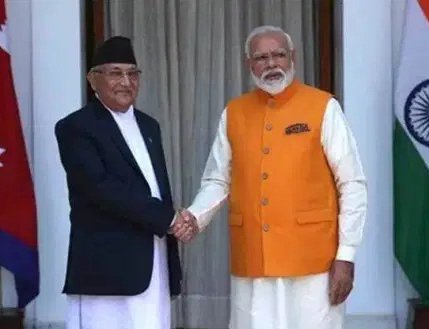 Relations, then an now
Two major questions that crop up in the context of bilateral context. Why did China’s clout increase to this level when India apparently calculated that the monarchy’s exit will increase its own influence on Nepal? And does India have any institutional allies left in Nepal, like the monarchy and Nepali Congress like in the pre-2005 phase?
The Nepali Congress was formed in India in the early 20th century and many of its leaders participated in India’s freedom struggle, thinking an independent and democratic India would help establish democracy back home. The party, despite consistently taking the lead role in the movement for a multi-party democracy with constitutional monarchy, was often branded “pro-India” by Communists given their close ties with Indian National Congress and socialists. However, following the 12-point agreement, the Nepali Congress was forced to accept the lead role of Maoists (Communists) in the impending political change, and agree to dispense with constitutional monarchy that it had all along said represented “forces of nationalism” and “symbol of unity in diversity”.
During major face-offs, three trade embargos since the 1970s and sensitive security issues, the Kings of Nepal and the Indian Prime Ministers, directly or by using back channels — including Indian royalty and even shankaracharyas when Nepal was a Hindu nation — have succeeded in bringing the crises to an end.
But over the years, India’s focus on Nepal appears driven more by security concerns and threat perception than by promoting a soft power-based approach like in the past.
During the current spell of dispute, India has once again begun ‘valuing’ common civilisational , cultural, historic and people to people ties.
India’s old allies, today
“Nothing could have been a more erroneous judgment of India in 2006 than that Maoists were the emerging forces of the people and bringing them to the centrestage of Nepali politics and power would consolidate democracy,” a senior Nepali Congress leader said. “I think it is about time that we reviewed the 12-point agreement and restore our lead role in Nepali politics rather than being seen as follower of the Maoists,” said Gopal Man Shrestha, one of the eight leaders who signed the 12-point agreement.
Besides the monarchy, Nepali Congress and in the recent past Madhes parties to some extent, the only other institutional ally that India has had is the Nepal army. The chief of each national army has enjoyed the status of Honorary General of the other side, on a reciprocal basis since 1950. When Oli refused to accept India’s invitation for a state visit in April 2006, during a blockade, it was the armies of both sides—especially at the then chiefs’ level –that did the homework for lifting it.
Oli became a nationalist and gained much popularity thanks to the blockade. But in the current sentiment triggered by the border dispute, the idea of nationalism has once again been appropriated by a Communist leader who has all through concentrated state powers upon himself. It’s Oli who is dictating Nepal-India relations.
Source: The Indian Express