Whenever Prime Minister K.P. Sharma Oli faces political challenges and threats to his position, his adversaries and friends, foreign and Nepali, give him a way out for survival.
A few months back when his rivals in the party were putting pressure on him to resign, the inauguration of a road in Kalapani by Indian defense minister Rajnath Singh appeared to be his Sanjbini Buti (a lifesaver) for his government.
After the inauguration of the road, Nepalese politics turned into such a state that Prime Minister Oli, who was accused as corrupt and inefficient, became a national hero, who was able to amend the constitution of Nepal incorporating disputed land of Limpuyadhura and Kalapani on consensus.
From his staunch critics Nepali Congress youth leaders Dr. Minendra Rijal and Gagan Thapa to his party rivals Pushpa Kamal Dahal Prachanda, everyone hailed him as a hero of the country for taking a stand against India. His chauvinist anti-Indian slogan made him the overnight hero.
At a time when prime minister Oli was in a dilemma on what to do on MCC as a majority of his rivals in the party expressed the opposition against it, threatening to vote against the deal, his rival Prachanda, Madhav Kumar Nepal and Jhalnath Khanal, who joined hands to overthrow him, rescued him instead.
Had they not united to oust Prime Minister Oli, he would not have recommended ending the session of House of Representative in haste. After finding himself in a minority in the standing committee and parliamentary party, Oli had few options to avert his rivals’ move.
Prime Minister Oli called a cabinet meeting in haste on July 5 and quietly visited President Bidhya Devi Bhandari recommending ending the session.
As his party colleagues Dahal, Madhav Nepal and Jhalnath Khanal were preparing a political move to summon a parliamentary party meets, president Bidhya Devi Bhandari prorogued the House session.
By doing so, Prime minister Oli not only blocked the move of his rivals to unseat him but also found a face-saving with the U.S on MCC ratification. Although these strategies helped him to boast about himself and save his chair, Nepal has to pay a high price on both counts. 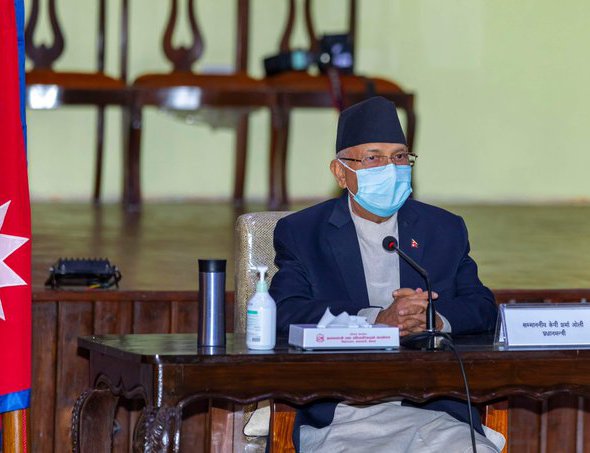 His chauvinist anti-Indian slogan and posture have damaged Nepal’s close and friendly relations with India. His recent move to end the house and place MCC in pending will hurt Nepal’s relations with U.S. as well.
“The government has informed the donor country, the USA that the Millennium Challenge Corporation (MCC Compact) was now on hold. With the expiry of the deadline to endorse the compact by the parliament two days back, the Finance Ministry wrote a missive to the US in this regard,” said Finance Minister Dr. Yubaraj Khatiwada.
The delay in the endorsement of the MCC compact by the parliament was the effect of intra-party wrangling in the ruling Nepal Communist Party.
Finance Minister Dr. Khatiwada said the ongoing budget session of the federal parliament was prorogued due to COVID-19. So the US was informed that the MCC compact aimed at the development of energy and transport sectors could not be endorsed by the parliament at present. He however said the government was for the implementation of MCC compact.
“It can be discussed that some points in the MCC compact could have been presented differently. But, the disputes still persisting over some points of the compact affect trust on and perspective towards Nepal government.” He suggested that some of the issues could be sorted out through letters of exchange.
Although the budget had incorporated some activities for the implementation of the compact, the difference within the ruling party halted it, pointing out the need for approval first by the parliament for undertaking the activities. With the end of the session, the MCC compact consisting of Rs 51 billion assistance by the US government to Nepal for energy and transportation sectors is in an uncertain state. Nepal has to pay heavily for the sake of Prime Minister Oli.
source Spotlight Nepal