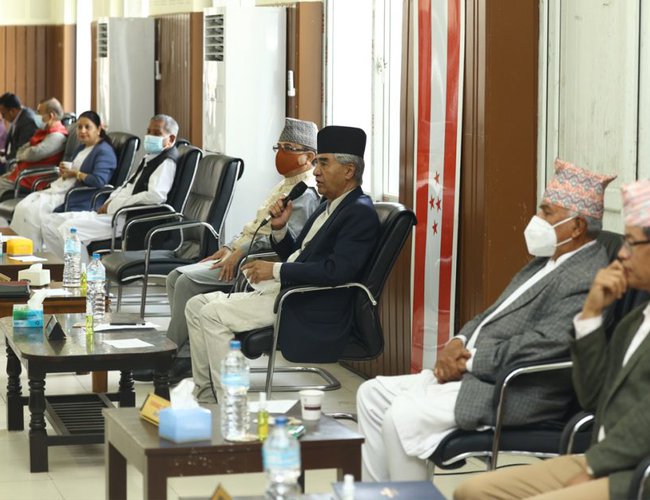 Publicly claimed as a party of liberal democrats and the only plural Democratic Party, Nepali Congress has had leaders always trying to project themselves as true democrats. However, a recent decision of the party’s executive committee to authorize PM Deuba as the sole leader to decide the party’s nominees for the national and provincial elections has shown it to be an autocratic party.

Suspecting the possibility of misuse of power in distribution of party tickets, Nepali Congress leader and central committee member Arjun Narshing K.C has already warned PM Deuba not to take arbitrary decisions in selecting the candidates.

A meeting of the Central Performance Committee of the Nepali Congress (NC) held at the party office Sanepa on August 13 decided to give the responsibility to the party President Sher Bahadur Deuba to hand over ‘formal letter of nomination’ to candidates who will be nominated by the party in the upcoming election.

The meeting also decided to register NC at the Election Commission to participate in the upcoming Provincial Assembly and Federal Parliament elections to be held on November 20 and in the proportional elections for the same federal and provincial assemblies.

According to a press statement issued by the party, the meeting has given the responsibility to party president Sher Bahadur Deuba to hand over ‘formal letter of nomination’ to candidates who will be nominated by the party in the upcoming election.

The meeting also decided to register the party at the EC in accordance with Article 271 of the Constitution of Nepal and Section 48 of the Political Parties Act, 2073 BS for the purpose of the election of members of the House of Representatives and members of the Provincial Assembly and assign the Chief Secretary of the Nepali Congress Central Office, Krishna Prasad Paudel the responsibility to complete the entire process related to it.

In order to complete the same process, the relevant body of the party will be instructed through the central office to propose and recommend the name of the candidate. The meeting also decided to conduct the nationwide election-centric campaign from August 26 to September 9.

The Central Work Execution Committee (CWEC) meeting of the ruling Nepali Congress has mandated party President and Prime Minister Sher Bahadur Deuba to formally send the candidate nomination letter to the candidates based on the criteria set by the party.

The CWEC meeting held at the party office Sanepa the same morning, that is, on Saturday, made five different decisions related to the general election.

NC to register party at EC for elections

The meeting of the Nepali Congress Central Work Execution Committee decided to register the party at the Election Commission (EC).

Although there are growing demands to hand over the leadership of party to new generation leaders, senior leaders like PM Deuba are still getting endorsement of young leaders.

Young general secretary Biswo Prakash Sharma proposed to entrust party President Deuba to provide an official letter of nomination to the candidates to be the fielded in elections on behalf of the party. Interestingly, the meeting attended by another young leader Gagan Thapa unanimously endorsed the proposal presented by party general-secretary.