Dr. Bikas Devkota, a spokesperson at the Ministry of Health and Population, said that Nepal to expand testing of PCR throughout the country as the country has now stock of 50,000 PCR kits.
He said that 14592 people are in the quarantine across Nepal. According to Dr. Devkota, a total of 143 are in an isolation ward and 2 in Kathmandu Valley. Province no 5 has the highest numbers of people in quarantine with 5298 followed by Sudurpaschim 3351, Karnali 2455, 1440 Province 1, and 1355 in Province 2. Bagmati Province has the lowest number with 254 followed by Gandaki 463.

In the daily media briefing at the ministry, he said that 109 confirmed cases in Nepal including seven new added today. Of them, 78 are male and 31 female. Three highest provinces with COVID-19 cases include 34 Province 1, 31 Province 2, 30 provinces 5. Bagmati province has 7 followed by Sudurpashicm 5 and Gandaki 2. Karnali has zero.
He said that 30 of the total infected have recovered while 72 are under treatment.
Dr. Devkota also said that 15,624 people are in the quarantine across Nepal. According to Dr. Devkota, a total of 135 people are in isolation, including those 79 confirmed infected who are under treatment at different hospitals across the country. 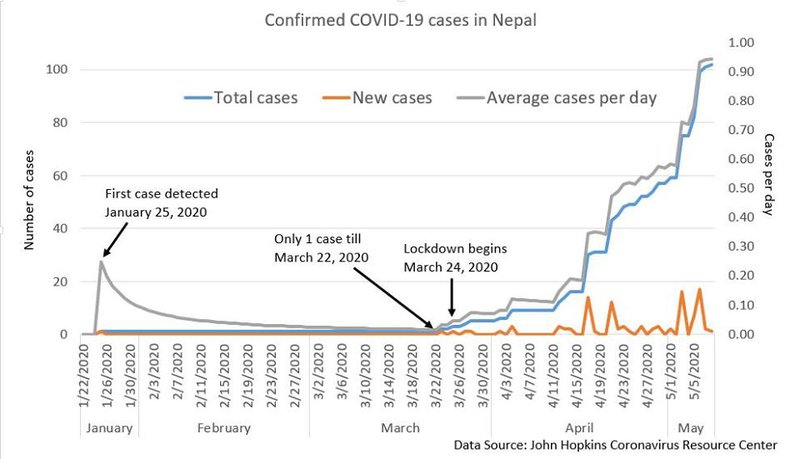 16309 PCR tests have been carried out so far while the number of RDT has been 55, 930. 1,742 PCR tests were conducted in the last 24 hours, according to the MoHP spokesperson. For detail: MoHP
copied from
NEW SPOTLIGHT ONLINE