India-China competition is intense; hence it is natural for China to come into Nepal-India issues. 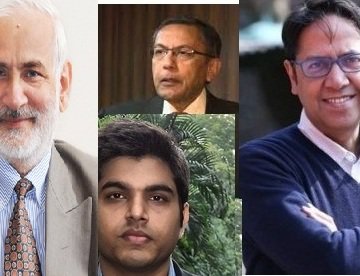 Indian senior Nepal Expert Prof S D Muni has remarked that for the first time, Nepal has come up with a map without a survey. He questioned which map has been Nepal submitted to the United Nations.
He said that the problem of conflict is British India and Nepal government. Hence, India has not encroached Nepalese land. He also expressed that China came to this region at the invitation of South Asian countries. They (including Nepal) wanted to counterbalance their relations with India. India-China competition is intense; hence it is natural for China to come into Nepal-India issues.
He made this remark during the webinar organized by Nepal Institute for International Cooperation and Engagement, a think tank based in Kathmandu on 24 May 2020.
“Nepal-India should have long term vision on what kind of relations both the countries want”, Ranjit Rae, former Indian Ambassador to Nepal said. He also said that the type of nationalism that is emerging in Nepal is because of India.
He said that Nepal has a set of evidence to claim the disputed territory and India also has a similar set of evidence and both sides should sit and resolve the issue amicably. However, the change of map of Nepal will make the process more difficult. There is a need for a calm and conducive atmosphere to resolve it.
Similarly, senior journalist and senior fellow at IIDS, Akhilesh Upadhyay said that Kalapani has to be resolved at the political level. The fact that the opening of the road at Lipulekh was inaugurated by the defense minister indicates that it has security implications, he emphasized.

Dr. Conatantino Xaviers, Fellow at Brookings, India said that the disputed territory that Nepal claims is in Indian control and he does not think it is going to be back to Nepal because of Indian military deployment and its unwilling to resolve because it is strategically important and an important pilgrimage route to Mansarovar. It would be further developed as a trade route if their relations improve. He suggested that both the sides should soon start the dialogue to resolve it, however, it is a very difficult situation as neither Nepalese PM KP Sharma Oli nor Indian PM Narendra Modi would like to show himself weak, so both sides would require lots of magnanimity, generosity, and foresight to resolve the issue.
Apekshya Shah, Assistant Professor of Department of International Relations and Diplomacy Tribhuvan University suggested that a technical committee like Eminent Persons Group (EPG) is important to resolve issues like this as it will depoliticize the issue.
All the speakers highlighted that the issue should be resolved on time so that the special relations between both the nations remain warm and cordial. The program was moderated by Atul K Thakur, Nodal Coordinator, India-Nepal Centre, PHDCCI and Visiting Fellow of NIICE.
copied   from
Spotlight Nepal