India Vivek Anand
May 12, 2018 10:37:03 IST
Babasaheb Ambedkar, having seen the plight of Dalits, had resolved not to die adherent to the religion of his birth. In 1950, he authored an article titled ‘Buddha and his Religion’, in which he wrote, “If the new world is to be different from the old world, then there should be more religion in the new world.”

On 14 October, 1956, Ambedkar converted to Buddhism, but before doing so, he closely grasped the nuances of the Hindu religion.

The new world has become even more different for Dalits who are following Ambedkar’s path today, and there is a need for them to move a different faith. It is to understand why they have chosen to do so that Firstpost travelled to Naiamu village in western Uttar Pradesh’s Muzaffarnagar district.

Located in the Charthawal tehsil, about 25 kilometres from Muzaffarnagar, Naiamu has a population of around 7,000 people, of whom nearly 3,500 are Muslim and 2,000 are Dalit. There is road connectivity but the road is in bad shape. The day Firstpost hit ground zero, water from the drains had spilled over onto the streets. The doorway to the only primary school had a heap of filth on it. 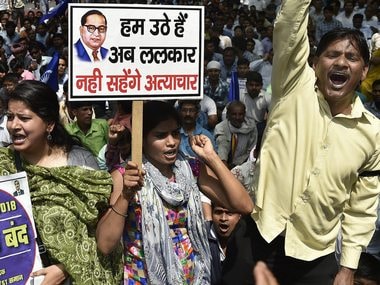 In front of a small house was a group of people, both old and young, who were eager to talk about their day-to-day frustrations. More than the municipal neglect was a greater problem: The discrimination they faced. Almost all Dalits here had converted to Buddhism in June 2017. Prior to their conversion, they confessed to have submitted appeals and memorandums to the Charthawal Police Thana and other authorities, but alleged that no one came forth to understand their grievances, or even attempt to resolve them.
In June 2017, they stated that Buddhist organisations (they failed to recall their names) had come from Hardwar and organised a conversion programme at the Guru Ravidas Temple, and on that occasion, nearly 800 Dalits had renounced the Hindu faith and adopted Buddhism. A certificate to the effect had also been awarded to each of the new converts.
Now these people do not wish to be regarded as Hindus. They have added ‘Boudh’ before their names to publicise their new faith. What’s not clear, however, is if the conversion took place due to social discrimination alone or there are other factors underlying their action.
With some prodding, it emerged that one of the reasons for the conversion is the clash between Thakurs and Dalits that took place in Shabbirpur village, and that injustice was done to the Dalits at that time. According to Naresh Baudh, Dalit homes had been set on fire during the riots, while the Thakurs had also used abusive language against Ambedkar, while figures of Ravidasji had been desecrated, which is why they converted to Buddhism in frustration.

Shabbirpur village, where the rioting took place on 5 May, 2017, is located in the adjoining Saharanpur district. Villagers mention that these Dalits had participated in a meeting held at Saharanpur on 9 May that was convened by Chandrashekhar Ravan, the founder of the Bhim Army. Though the meeting was progressing in a peaceful manner, the police resorted to a lathi charge followed by stoning that caused anger among the Dalits. In retaliation, they decided to convert.
Dalit youth Deepak Kumar Baudh said there is no concept of untouchability among Muslims, a scourge prevalent only among Hindus. He said that if he or any of his relatives were to visit upper caste homes, tea wold be served separately to them. His elders tolerated such discrimination, but it’s beyond people like him to do so. He said Ambedkar had shown them the path they were now following.

A similar streak of anger at social discrimination had led to some Dalits of Naiamu converting to Buddhism even back in 2004. Another Dalit youth, Vinay Kumar Baudh, revealed that whenever there is a dispute between Hindus and Muslims, the upper caste Hindus call Dalits their ‘Hindu brothers’, but on occasions when there isn’t need for them, they indulge in discrimination.
The Dalits here believe that Muslims, who do not practice any untouchability, are in fact better people for them. When asked as to whether the conversion had resolved their problems, a silence prevailed for a while after which Vinay Baudh remarked that since there was no discrimination in Buddhism, they are all equals now.
There is an influence of the Bhim Army among the villagers here, and on social issues, Dalits stand alongside the Bhim Army. Even for the Bharat Bandh on 2 April, Dalits participated in peaceful protests. There is a school being run in the village under the aegis of the Bhim Army, though it is not referred to as ‘Bhim Pathshala’.
The Dalits of Naiamu state that neither have they received the benefits of various Dalit welfare schemes, nor has any leader visited this village under the BJP’s ‘Grasm Swaraj Yojana’. They also say no BSP leader has come here, not even for the conversion ceremony. A reason for other leaders not coming here, they feel, is that it is generally taken for granted that Dalits are all committed BSP voters, although it was conceded that votes were cast in favour of Modi during the 2014 Lok Sabha polls.
A few days ago, news that BSP would visit the Dalit community and organise a chaupal(community gathering) made the rounds, but there has been no such event till now. Gulbir, a local doctor associated with the BSP, told Firstpost that there would be no chaupal exclusively for the Dalits, but for all backward and forward communities, who would all be made to understand the atrocities being committed against Dalits.
There is currently much anguish among the Dalits of these backward regions of Muzaffarnagar, who find themselves entangled in the politics of the times, sometimes struggling to find their footing within their own faith and sometimes trying to walk away from their own faith.