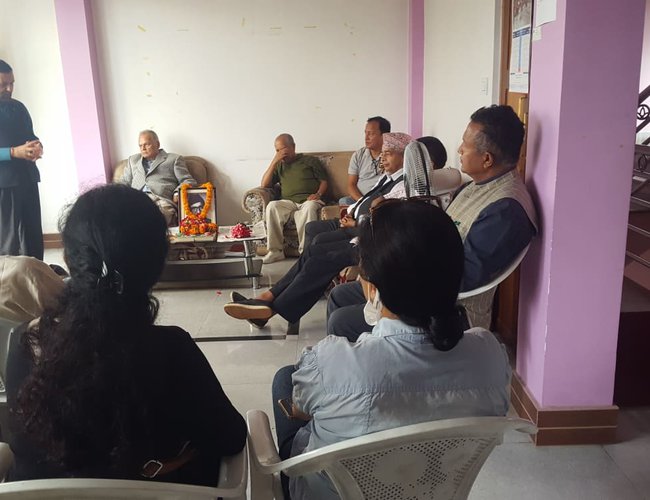 Co-Chari of BP Ideology National Society and former Joint General Secretary of Nepali Congress Govinda Raj Joshi has said that BP Koirala’s ideology on nationalism, democracy and socialism is always relevant to Nepal. He said that BP Koirala’s ideology is the heart of the Nepali Congress and the party cannot revive without championing his ideology and glory.
Address a program organized by BP Ideology National Society on the occasion of the 38th death anniversary of party veteran leader and first people’s elected Prime Minister of Nepal, Bishweshwor Prasad Koirala, NC leader Joshi also warned NC will vanish if it fails to stand on democracy and nationalism.
Joshi blamed Nepali Congress for giving up the ideology of BP Koirala. He said that NC leadership needs to honestly follow BP if they want to revive the party. Amid a spread of coronavirus, the society hosted the program at a small venue.
Central Committee member Lokesh Dhakal conducted the program and highlighted the expansion of the organization.
The NC held a function at the Sundarijal Detention Centre, where BP Koirala was detained for eight years after the 1960 royal coup. The day saw leaders from both the parties hailing their leaders and issuing a call for total democracy, which both the leaders fought for.