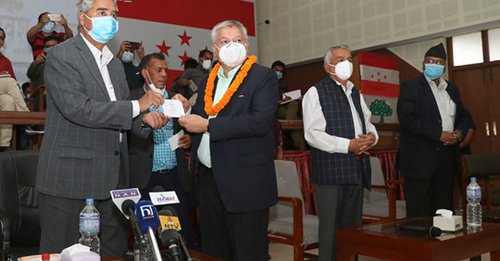 In presence of NC senior leader Ram Chandra Poudel, Dr. Ram Sharan Mahat and other senior leaders, Deuba welcomed Thapa and announcement of Joint General Secretary of Nepali Congress.
During the welcoming program, Deuba has announced that Thapa is appointed joint General Secretary of the party.
Welcoming Thapa in the party, Deuba said that the entry of Thapa to the Nepali Congress will help to strengthen democratic forces in Nepal paving the way to fight the communist government.
Thapa said that he quit his mother’s party after growing the difference over secularism and monarchy. He said he is entering the party unconditionally.
At a time when Nepali Congress is itself in a deep division and there is growing disenchantment among the party’s rank and file, how hardcore Congress workers will treat him in the party remain to be seen.